To celebrate Christmas 2015 we wanted to develop an in-house web app. The project needed to be fun and challenging for us to create, whilst being engaging for external people to take part. What we needed was a concept that had lots of opportunity and was exciting. The Drive team are all huge movie fans – so what better subject than Christmas movies?!

We put on our thinking caps, bounced around ideas and decided to make a ‘Christmas movie advent calendar’ web app.

We designed and built a bespoke web app that sat within our existing WordPress website. It functioned as a digital advent calendar, releasing a new door each day. We included a competitive element to ensure the campaign was captivating. Throughout the campaign, we engaged our audience through social media promotion, encouraging Twitter users to guess the movie and share their answers.

The look and feel needed to be both Christmassy and fit alongside our current brand imagery. We developed a style that was representative of Drive Creative Studio and was also flexible enough to be used in conjunction with a multitude of iconic Christmas movie images.

How did the web app work?

Behind each numbered door sat a pictogram – an illustration of a significant moment from a famous Christmas film. Each day throughout December 2015 the corresponding door became available to open. Participants were asked to ‘guess the movie’. On each door was a button linking to Twitter that automatically populated a text box with the campaign hashtag, prompting participants to enter their guess and share.

Participants could enter once every day and each correct entry using the campaign hashtag was popped into our ‘hat’ ready for the prize draw at the end of the month. We chose one winner who was thrilled with his prize. 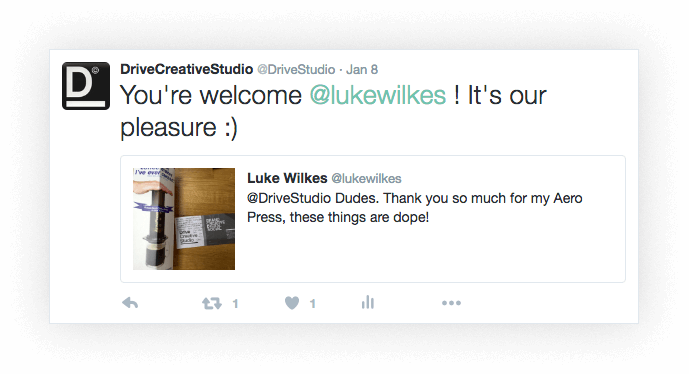 We had many entries from lots of different Twitter accounts, some old followers and some new. Through the use of the campaign hashtag we gained lots of traction of social media.

The objective was to showcase the talent of our in-house creative team and we were humbled by the incredible feedback from participants and followers.