Why explainer videos are the way forward.

Posted by admin on Aug 18, 2016 in Digital marketing, Technology | No Comments 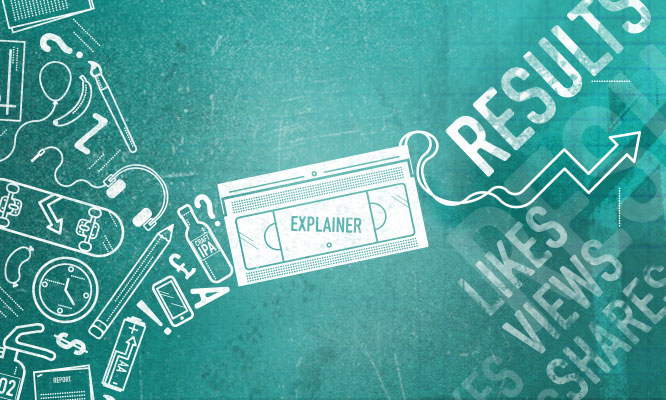 Explainer videos are fast becoming a common approach for marketers – and for good reason.

Last month, we explained what explainer videos are all about and that they tend to be short-form motion content. They’re also more commonly information based – as the name might suggest, they explain information both verbally and visually. This month, we’re asking why should you create an explainer video as part of your content marketing strategy? Drive Ops Director Cath has been looking into the reasons for using video content…

One school of thought says that marketing is all about making predictions. Predictions based on repetitive behaviours, experience or just plain old probability. But predictions are just ‘educated guesses’. As an example, it has been predicted by NBC News that by 2020 we’ll all be wearing augmented reality glasses, wafer-thin OLED screens will be commonplace and we’ll all have microchips implanted into our skulls.

When it comes to making predictions in the digital world, researchers, journalists and industry fans can get swept up in the science-fiction utopia of it all. There is, by contrast, a tome of legitimate evidence that suggests video as a marketing format is only going to grow.

Buckle-up and I’ll take you on a whistle-stop-tour of stats exploring the benefits of using explainer videos.

2)    Explainer videos are great for improving SEO
Adding explainer videos to your website increases your visibility via search because search engines favour rich-media. There is less competition for video content. You’ll also improve your click-through rates whilst minimising bounce rates because visitors are more likely to stick around and watch your explainer video. Video also gives you the opportunity to transcribe your video thus creating extra text content to crawl.
Global SEO informers MOZ explain in their ancient video (from 2010!) how video content can be used as part of your SEO strategy:

And if that wasn’t enough, here is an infographic all about how video can improve your online visibility – this SEO company suggests that video attracts three times more inbound links than other content. Not bad, eh?

3)    Explainer videos help build your brand awareness
If brand awareness is defined as ‘the remembering of brand elements, products and services’ then explainer videos are definitely up the list of ways to etch your company into a viewer’s memory.
It is suggested by Insivia that on your average visit to Facebook that each person watches two videos. Video and image based posts have a much higher recall than their equivalent text post. They also report that 36% of online consumers trust video ads. So you might not believe everything you read, but a large number of us do believe what we watch.

Video company Switch explain the science behind this that “when you stimulate just the auditory sense (reading or hearing) you only retain 10% of the information. When you stimulate the auditory and visual sense (watching video) you retain 68% of the information. This is called Dual Coding Theory and is an important factor in simplifying communications.”
4)    Delivers the same pitch each and every time
You’ve spent time refining your audience and have precisely tailored your key messaging. Your objective is to persuade them to buy. By generating consistent, high-value video content you’re setting the stage for what the purchaser can expect from their relationship with you moving forward. A well refined pitch will strike a chord with your audience and could quite possibly be the foundation of your relationship thereafter. First impressions always count.

5)    Explainer videos are a hook
Often as part of your content marketing strategy, you’re looking to attract the attention of people who may not be intentionally searching for your brand or product. Shown on the right platform at the right time, an explainer video can be a head-turning way of capturing someone’s awareness. It was reported in the Telegraph earlier this year that humans actually have a shorter attention span than goldfish. We like to call this the ‘magpie effect’– i.e. if you make your explainer videos bold and persuasive; you’ll by default make them attention grabbing and engaging.

7)    An explainer video can help improve your return on investment
In 2015, ReelSEO, reported in a survey that 96% of business to business organisations use video in some capacity in their marketing campaigns of which 73% report positive results to their ROI. According to SEO company Go Up, Here is a nice infographic all about how video can improve your online visability – this SEO company suggests that
12% of viewers go on to buy the product or service featured in a video. They also predict a 70% increase in revenues generated directly via video content from 2011 to 2017.

8)    An explainer video both shows, and tells, your story
Almost 60% of executives would rather watch a video about a product or service than read about it – Forbes. I’m starting to think that perhaps I should have made a video of this blog now. Hello, anyone still there?

9)    Explainer videos force you to simplify your message
By ‘simplify’ we don’t mean ‘dumb-down’, or ‘thrash out’ your message until all meaning is lost. This is about making sure you’re communicating the essence of your key message, not the novella version. A clear and concise message can make your brand appear (more) professional.

10)    Explainer videos provoke an emotional reaction
We’re not talking about a raising a chuckle here. Whilst explaining a product’s features and benefits might back up its value, it’s the emotional connection that outweighs the logical reasons. It’s more about the alleviation of psychological need or eliminating the FOMO (fear of missing out). Could it be that a striking a ‘pain point’ or ‘need’ is more psychological, than a rational? Article in Entrepreneur magazine explains more on this.

11)    Explainer videos are fundamentally shareable
If word of mouth was the best form of marketing during the 20th century, then shareability is certainly making its way to the top of the list during the 21st century. We’re not suggesting that your video is set to go truly viral, because it probably won’t.
Shareability effectively turns your content into your sales pitch and your audience into your extended marketing team – what’s not to like about having your own audience promote your product or service?

What has your experience been of being a viewer of marketing videos?  Do you agree with the stats above?