Kayaking the Exeter Ship Canal – Our big day out

Well, it’s the end of another busy summer for the team at Drive Creative Studio so we decided to treat ourselves to a day out kayaking the stunning Exeter Ship Canal.

At 13:15, bang on schedule, Sam arrived from Exe Adventures with five fine one man kayaks and accompanying buoyancy aids and oars. Tom nominated himself to have the only green kayak which also meant he was responsible for the Ortlieb dry-bag containing everyone’s car keys and wallets etc.

We started our adventure at the Quay in central Exeter (top left of the map) with the aim of paddling 3.5 miles, past two locks, two pub stops and under the M5. We were issued with a tow-rope in-case of laziness and instructions to call for a pick up once we had had enough. Sounds ideal, we thought.

After 30 gentle minutes of paddling the first stop of the day was the Double Locks where we spilled out of our kayaks for a spot of lunch and a chat with the local swan community. 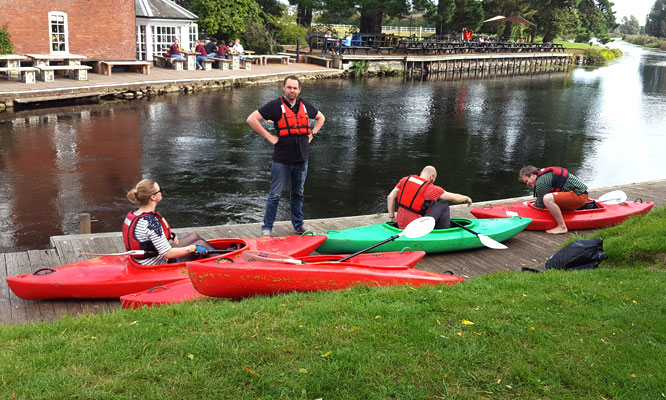 Some of you with a keener eye might notice a new face amongst the team. We recruited over the summer for a Junior Designer and out of 100+ applications chose James as Jon’s left-hand man. Welcome aboard James! 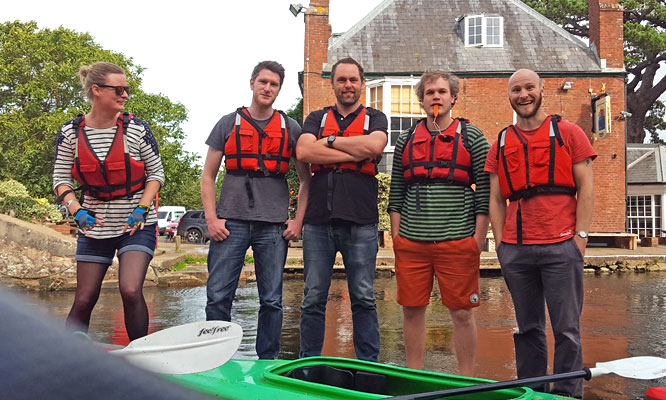 It was time to crack on with our adventure – we had hired the kayaks for four hours and time was ticking. This next section is where things took a turn and what started as a gentle outing soon became a high-speed chase and rather a lot of splashing one another (and ourselves).

The algae and weed in the water made the whole experience incredibly difficult. At points it felt as though we were paddling through quicksand – a good workout for the shoulders but not the smooth sailing we’d envisaged. Most of us ended up with decks, legs and backs covered in algae and weed from the oars dredging up odds and ends. At one point near the sewage works the algae was so thick that we must have looked hilarious to passers-by on the cycle path – so much so that one of them stopped to film us attempting to navigate the treacherous waters.

After the difficult patches was a reeeeallly long stretch of water that seemed to go on for days and to make it all worse, we couldn’t even see the second pub on the horizon. Slowly but surely, one dip of an algae-covered oar at a time, we noticed the main-masts of various moorings we knew were next to the pub. Just around the next corner… 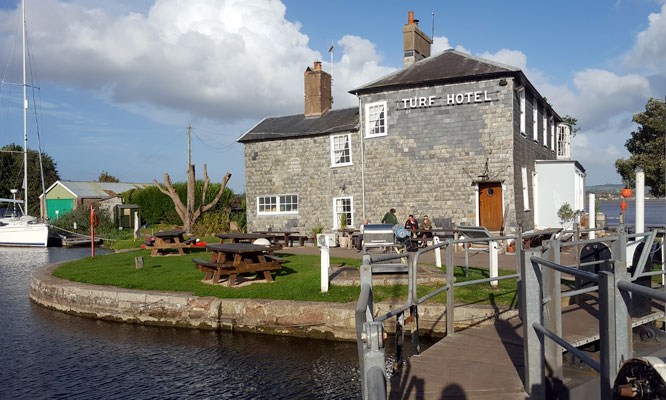 Our final stop – The Turf which sits elegantly at the head of the Canal where it meets the River Exe.

The Turf Locks! By this point in the day most of us were nicely content with the journey to date and ready to call it a day. It was just a matter of phoning in our location for a military style extraction by the ever-helpful Sam, and enjoying a well deserved pint whilst we waited and watched James picking blackberries. It was great to get out in what might be one of the last days of full sunshine before the winter, and – despite the fact there’s a good chance all of us are now cultivating Exeter Canal algae in our bathtubs – the general consensus was one of an afternoon very well spent. 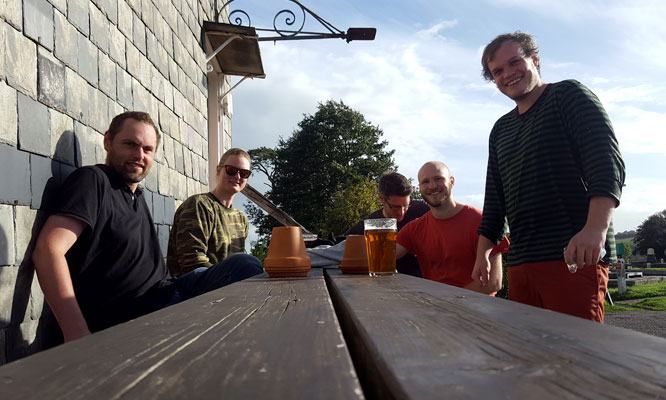 A well-deserved pint for a very soggy James.