Living and working in Devon certainly has its perks, we can’t deny it. Miles of beautiful coastline and beaches, and further inland the rugged wilderness of the moors, countryside and ancient woodland – Devon is a playground for outdoor activities. The team at Drive Creative Studio therefore unsurprisingly love the great outdoors and inherently love working with outdoor brands too.

To indulge ourselves in all things outdoors we recently headed to the first South West Outdoor Leisure Show at WestPoint, Exeter.

The first of its kind in the South West, it was promoted as a showcase of the wonderful outdoor lifestyle that the South West has to offer. Although the exhibitors and attendees were in short supply we were treated by guest speaker, living legend and national hero, Sir Ranulph Fiennes OBE – ‘the World’s Greatest Explorer’. 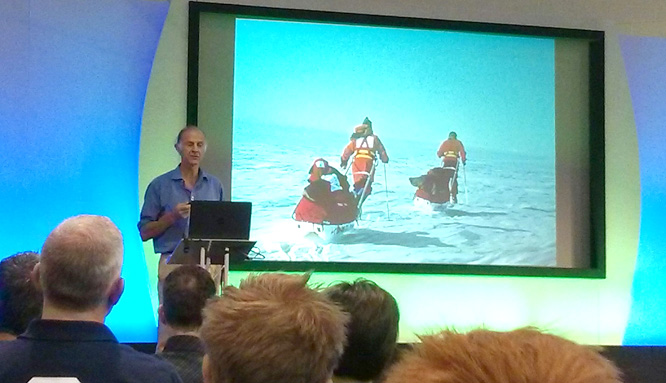 After Jon got his copy of ‘Cold‘ signed, we took our seats in anticipation of hearing stories from Sir Ranulph. The hour-long inspirational talk was full of trials and tribulations, high points and low points of the many adventures he has led, circumnavigating the globe, crossing the Antarctic against all odds and testing his limits of endurance to the maximum in the most hostile environments on Earth. What was unexpected was his captivating tales – full of good humour and mischief – about his younger days when he was thrown out of the SAS due to his extra curricular creativity with explosives, or exposed secret training missions to rob Barclays bank. What resonated the most however, was his humble nature as he described the realities of losing limbs but never strength of character and his great fondness and respect for his late wife, Ginny, who he considered his “greatest achievement”. At 71, he’s still working hard on his next expedition, the details of which he was unable to disclose for fear of not being first to achieve another world first – incredible. 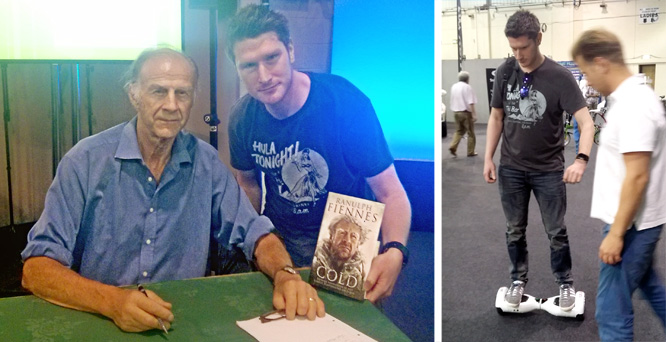 To ease back into the exhibition hall, we decided to ace the Army indoor climbing wall and have a spin on theairwheel, a personal transport vehicle that uses cutting edge gyroscope technology to control stabilisation and stay upright without any other supports. It’s on our office shopping list.

Here’s to the event continuing to develop and gather interest in the hopes of it growing for its second outing next year.