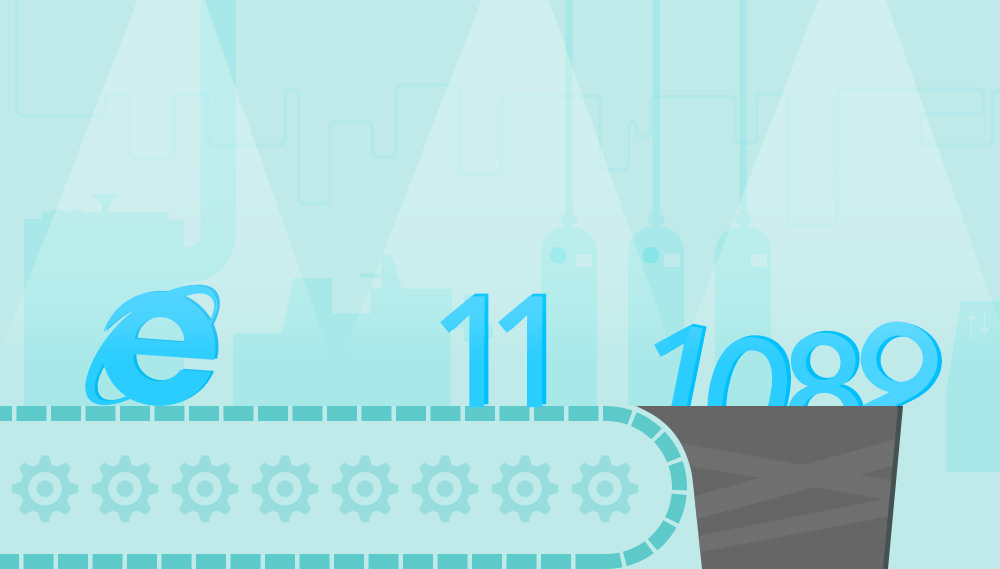 As of today, January 12th 2016, Microsoft will no longer provide security support for older versions of Internet Explorer, namely IE 8, 9 and 10.

The browsers (released in 2009, 2011 and 2012 respectively) will receive a final “End of Life” upgrade, applying to “Windows 7 SP1 and Windows Server 2008 R2 for users who have not upgraded to Internet Explorer 11” (as reported by Microsoft’s Steve Thomas).

Users will be vulnerable to security threats, malware and hacks that may compromise user data, a genuine concern because attackers often target unpatched software.

Users will be encouraged, via a ‘nag’ message, to upgrade to the relevant version of the browser for their operating system, either IE 11 or Microsoft Edge.

What does this mean for us as web developers?

This news is music to our ears! Internet Explorer 8, 9 and 10 regularly presented compatibility issues due to lack of support for contemporary coding standards and features. Dealing with these anomalies resulted in many lines of extra code, additional project time and slower websites.

This move by Microsoft shouldn’t come as too much of a surprise, considering the demise of Internet Explorer over the past decade (and rise of rivals Chrome, Firefox, etc). Whilst this may be a significant move in Microsoft’s plan to transition customers onto the Edge browser, in the eyes of many it’s an opportunity for the web to move forward. Older versions of IE fail to implement modern web technologies (limiting HTML5, CSS and Javascript features), resulting in a suboptimal experience when browsing the web.

With an update to IE 11 or Edge (or better still, the current market leader: Chrome) you’ll experience a safer and more stable online journey, where less code is written to cover compatibility issues, resulting in faster load times and an overall smoother experience.