People all over Devon are having a well deserved rest this month as both the Rowcroft SleepWalk and the Colour Road Rush charity events come to a close.

Drive have been working with Devon-based charity Rowcroft Hospice for many years on their promotional fund-raising campaigns and events that go toward supporting the hospice’s vital work providing support for adults living with life-limiting illnesses in South Devon.

Drive conceived the SleepWalk’s Wild West theme using the event’s mascot Barbara the Sheep to spread word on the up-coming hoedown. On Saturday 11 July, a posse of 1800 cowgirls took to the streets of Torbay, walking up to ten miles in aid of the charity. Last year brought the buzz of Brazil to South Devon, but this year was all about boots, chaps and cowboy hats.

An unbelievable £169,000 was pledged on the night alone, without accounting for the sales of merchandise and other funds raised on the night, which are set to make the amount rise again. 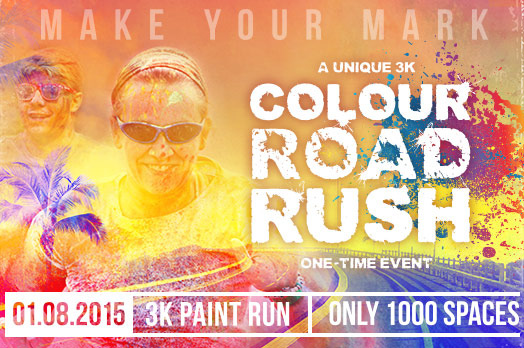 A month later, and another event – this time a 3k pain run – was underway. The Colour Road Rush was a unique, one-off event that had participants making their mark on the new South Devon Link Road, becoming part of South Devon’s history on Saturday 1 August 2015. In partnership with GallifordTry and Linden Homes, the link road has been over 60 years in the making and hundreds helped celebrate the launch of the new road by turning it in to a neon rainbow. Drive produced the identity and applied it’s distinctive vibrancy across the event promotion, over literature, Adshels, sponsorship forms, train adverts and vinyl banners.

It is hoped that Rowcroft will have raised in excess of £50,000 for the hospice. The team at Drive is extremely proud to have been involved in the promotion of both of these events; they have been a great success for an extremely important and worthy cause.

You can see our work for the Sleepwalk and The Colour Road Rush in our portfolio.